Red House Mysteries have honed their craft as interactive game designers over the years, as well as developing a passion for truly immersive storytelling.

Their escape rooms and treasure hunts are a lot more than just a series of simple clues to follow – the aim is to draw people into a different world where they use their wits and problem solving skills to untangle the thread of a story as it unfolds around them, with their decisions driving them along to the dramatic finale. This is not about passive observation but about getting physically involved; it is about seeing, touching, hearing and even smelling the puzzles – then and only then can the players escape from the real world and experience a true adventure.

Below is a selection of previous rooms and events we’ve run. If you’re interested in seeing what we can do for you and your party now then check out our current escape rooms and interactive games.

“Your expertise in such matters is well known, I sincerely hope you will be able to gain access for us and maybe even allow us to add the fabled ‘Heart Of The Congo’ to the museum’s collections.”

The Heart of the Congo was an escape game built entirely inside a mysterious packing crate. Designed in association with the Royal Albert Memorial Museum for their Victorian Time Traveller’s Ball in February 2018, teams had 25 minutes on the clock to get inside the crate, discover it’s secrets and ultimately find ‘The Heart of the Congo’, a priceless stone to be added to the museums exhibits.

“You; of course, have been bought here to uncover the truth. Mr Lyman was a curious, eccentric man throughout his life and there are many puzzles to solve, codes to crack and locks to be broken before you may do this.”

The Death of a Party was an Escape Room and Murder Mystery created by Red House Mysteries for the International Agatha Christie Festival in 2017. Set in the stunning Mayoral Ballroom at Torre Abbey, teams were given 45 minutes to survey a crime scene – the very recent death of local millionaire Frank Lyman – and solve the puzzles, riddles and clues in order to uncover the truth behind his demise. Whilst Red House Mysteries designed and ran the game for the Agatha Christie weekend, it is now under stewardship of the festival itself and there are plans for them to run it again soon – click here to find out more.

What started out as a quiet weekend in the country is soon a tale of excitement and adventure as the gang find themselves on the trail of smugglers and hidden treasure! Will they manage to solve the clues and find the treasure in time – and more importantly, will they do all in time to make it home for lashings of ginger beer?

The Treasure of Ashcombe Barn was a bespoke game designed for a hen party taking place in South Devon. Each member of the party was given a copy of a ‘Famous Five’ style hardback book that included them as the characters, and in following the story it lead them on a treasure hunt around the South Devon coast, ultimately culminating with them digging up buried treasure on the beach.

Hot-headed private investigator Jack Armstrong is in way above his head. His latest investigation has left him locked up and framed for the murder of local socialite Betty Darlington. You and your team are his last hope to clear his name… Can you break into his office to find enough evidence to prove his innocence and put away the real killer?

The Darlington Mystery was our first escape room and the prequel to The Scarlet Shadow. Set in 1937 against a backdrop of mystery and corruption, solve the puzzles and find the evidence to get to the bottom of Jack Armstrong’s latest case and clear his name.

The year is 2147 and neon cities sprawl across the globe. Terradyne Global provide everything that anyone could ever need or want for, from housing to food to travel, and they have brought peace to a united world. A mysterious package arrives in your hands from an independent trader named Alexon Granger. Minutes later the whole building is in lockdown and your life is in imminent danger. Can you uncover the truth in time?

The Terradyne Gambit was our second room. 200 years in the future, the world is controlled by an oppressive corporation called Terradyne Global. You are a team of journalists trying to uncover the truth behind the sinister company before it’s too late… 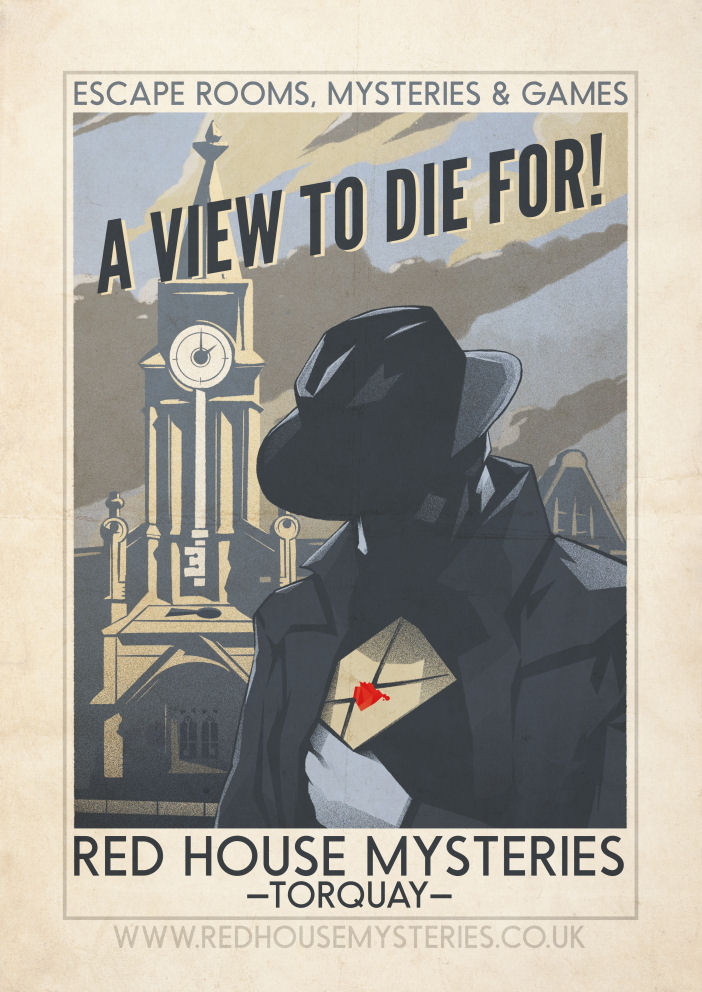